Guardians of Another World

Guardians of Another World (異世界の守護者, Isekai no Shugo-sha?) is the twenty-fourth episode of The Rising of the Shield Hero anime.

Melromarc brings a large fleet to fight the Wave out at sea. While the queen takes charge and leads the operation well, the other three heroes prove useless yet again, leaving Naofumi to do it all alone. Later, he gets help from L'Arc and Therese to fend off the monsters, but then.

After finding Cal Mira Archipelago's underwater Dragon Hourglass telling that the next Catastrophe Wave will strike in 2 days, Naofumi, Raphtalia, and Filo rushed back to Melromarc (via Teleportation skill of the Shield) to alert Queen Mirellia and Princess Melty. The next Wave is sure to be occurring at open sea, so both Mirellia and Melty are already aboard battleships on their way to fight with their countless Knights and the other three Heroes with their respective parties (with the Sword Hero being oddly frightened to fight, perhaps due to sea-sick sensation). Melty came along because she feels like being part of Naofumi's group, much to Filo's joy. Queen Mirellia adds that Earl of Habenburg had already had Cal Mira residents safely evacuated beforehand. Even with this imminent threat, the other Heroes still refuse to teamwork, believing that their individual level-up will be enough. Raphtalia sees that L'Arc and Therese are also coming to fight, both whom Naofumi regards as being far better and reliable than the other Heroes, but the redhead guy strangely ignores Naofumi.

The Wave strikes teleporting everyone to it. The Knights deploy cohol fruit barrels into the ocean (the alcoholic effect will help to stun the monsters) and fire arrows to bring out and kill the numerous aquatic enemies. The boss monster, a huge narwhal-like creature known as the Inter-Dimensional Whale, shows up. Itsuki fires a Meteor Shot, but it deals no damage. Ren states that it can only be effectively attacked if lured out of water. Naofumi and Filo dive into the water, by Mirellia's request, to draw out the monster; the Soul Eater Shield uses Hate Reaction to attract the foe and force it to jump into the open air. The three Heroes use Meteor Shot, Meteor Thrust, and Meteor Slash, but these don't even scratch the monster. The creature attacks with a powerful laser from the crystal on its forehead, destroying one of the ships. Using a harpoon launcher from another ship, Raphtalia fires a magic harpoon which pierces through the monster, thanks to her own level-up, she was able to damage the monster in comparison to other Heroes but lacks the finishing blow.

The smaller fish-like monsters start invading the ships, but Melty's Zweite Aqua Shot quickly makes short work of them. One of the monsters stealthily snatches Melty and tries to drag her into the sea, but L'Arc saves her right in time. He unleashes a Skybound Wheel Swing to get rid of more monsters. The Knights and ships crew keep deploying arrows and cohol fruit barrels into the sea. Melty suspects of L'Arc distaste when she mentions Naofumi. The Shield Hero invites L'Arc to take down the monster for which he asks him to lure the monster out in the air again. Nafoumi and Filo bait the narwhal out of the water; L'Arc and Filo attack with Skybound Wheel Swing and Spiral Strike; Therese's Bejeweled Thunderstorm combines with L'Arc's Scythe into the Combo Skill: Thunderstorm Wheel Swing, finishing the monster for good. The other Heroes come to pilfer the drops from the slain monster which annoyed Naofumi for they didn't do anything worth. but L'Arc belittled the three heroes as "weaklings" and rapidly repelled them. L'Arc reveals that he wants to kill the Shield Hero for the sake of his own world.

Though they have nothing "personal" against Naofumi, L'Arc and Therese reveal they are also Heroes from another world which was also on brink of destruction due to the Waves and for their world to survive they want to take out the heroes of this world to ensure that this world faces destruction and theirs will be spared. Mirellia and Melty declare them to be the enemy and order the Knights to help the Heroes against them. The Knights and even the Heroes prove no match for the two adventurers. Therese summons a Bejeweled Meteor Shower to non-lethally neutralize the Queen's forces and a Bejeweled Silver Lining, so they can fight without interference. Therese asks Raphtalia and Filo to stay out because only Naofumi is their target, but the two girls decide to fight anyways. L'Arc lunges at Raphtalia, but the Soul Eater Shield bites his right arm. Queen Mirellia orders to rescue the Knights and crew, as the party members of the Heroes are carrying back the Heroes who were fallen into the ocean.

Meanwhile, Melty demands Rishia to take her to where Naofumi is. Naofumi blocks L'Arc's Scythe but feels his own right arm hurt; Therese fires a Bejeweled Sin Flame which oddly dissipates before hitting Naofumi. A sorrowful voice comes from the bracelet Naofumi has crafted for Therese, "refusing" to go against him. Therese decides to switch bracelets, and L'Arc explains his physical strike deals damage in direct proportion of the target's defense, thus being "perfect to use against the Shield Hero". Naofumi gets irritated that L'Arc is always throwing him off his phase since they met. Melty arrives to help. Instead of feeling cornered, however, Naofumi feels confident. He reveals his trump card Air Strike Shield and Second Shield which will render L'Arc's attacks useless. Thus both of them places all their cards in the open. The two parties clash furiously with several strikes from both sides; Filo's and Melty's Combo Skill: Typhoon pushes L'Arc backward into Second Shield, and Raphtalia's sword injures his left arm. The two parties compliment each other's strong points, and Naofumi starts acknowledging L'Arc and Therese as real Heroes from their own world.

Suddenly, a female voice is heard.and a powerful attack was launched against one of the remaining ships. Naofumi recognizes an old enemy, Glass, standing beside L'Arc and Therese. She launches Zero-Stance Rondo: Reverse Four Seasons and Rupture-Stance Rondo: Tortoise Shell Cracker, both which Naofumi can barely contain. Glass explains that Naofumi was able to fight toe-on-toe and even hurt L'Arc substantially without manifesting full power. The Shield Hero stands ready to fight the raven-haired woman again as she proposes to take him down personally. 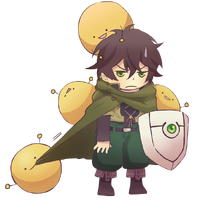 Retrieved from "https://shield-hero.fandom.com/wiki/Guardians_of_Another_World?oldid=35290"
Community content is available under CC-BY-SA unless otherwise noted.